Tours: Church is open for visitors daily during their opening hours

All year
Riola church is open for visitors during weekdays from 9:30 am to 7:00 pm and on Sundays from 11:30 am to 7:00 pm. Please note that church services and public holidays can affect the opening hours!

The small mountain village of Riola di Vergato lies on a slope of the Apennines some forty kilometres south of Bologna, along the road to Pistoia. The ecumenically inclined Bishop of Bologna, Cardinal Giacomo Lercaro, asked Aalto in 1965 to design a small church next to the old highway bridge across the river Reno. Aalto’s initial plan from 1966 already showed the church in its final form, but it was later supplemented by a wider plan including a retirement home and a kindergarten. Plans were then further developed in 1969 and again in 1975, continuing until 1980.

As Aalto had done in Seinäjoki, Aalto laid out an enclosed piazza in front of the church, in order to enable a large congregation of thousands to participate in divine services at major religious festivals. Aalto also thought that the church itself, which normally seats a congregation of 200, could be equipped with a gigantic sliding wall in order to divide it up, according to need, into a mini-church – comprising the altar, chancel, and baptistery – and a larger room for non-religious events. The church has an asymmetrical basilica disposition of a slightly wedge-like shape; the unusual roof system consists of a stepped vault whose fragments run longitudinally on one side, while the other side slopes towards the chancel. The surfaces of the fragmented vault are glazed, so that the whole church is bathed in sunlight reflected by them. The vault system is borne by seven gently curved, asymmetrical concrete arches that emerge from the ground on one of the long sides; they recall the shapes of Aalto’s famous wood furniture.

To the left of the chancel is the vestry, which forms part of the vicar’s apartment. The baptistery is on a somewhat lower level to the right of the chancel; it has a lantern visible from the outside and a window overlooking the river below. A campanile, consisting of five parallel vertical concrete planks, rises on the far side of the forecourt, providing an optical lift as a counterpart to the sloped roof of the church. The forecourt is walled off on one of its long sides, sheltered from the ravine of the river. The opposite side is lined by a colonnade and a modest parish building housing youth clubs, meeting rooms, etc. 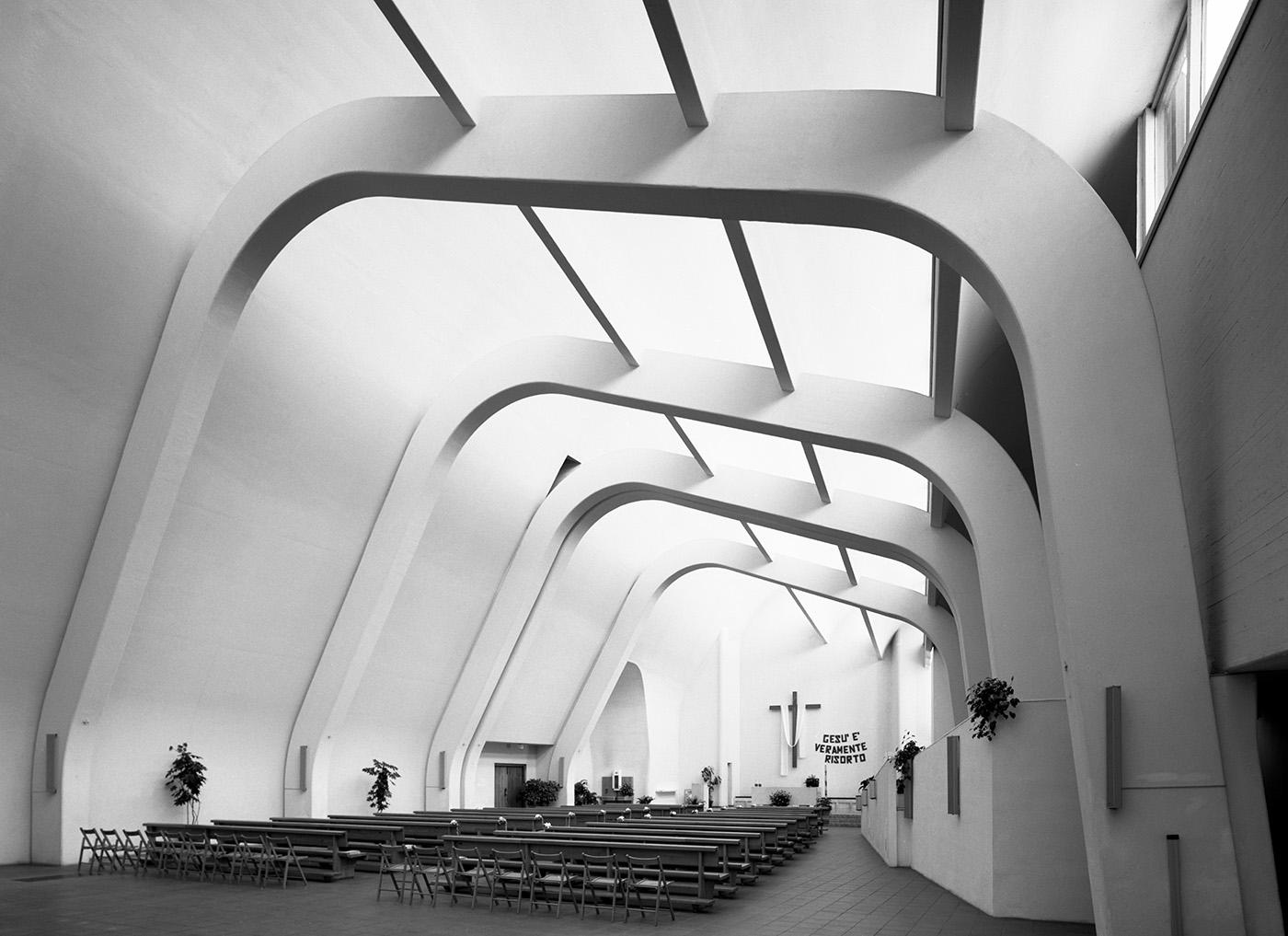 The white vaults of the Riola church reflect the daylight into the church hall. Photo: Maija Holma, Alvar Aalto Foundation 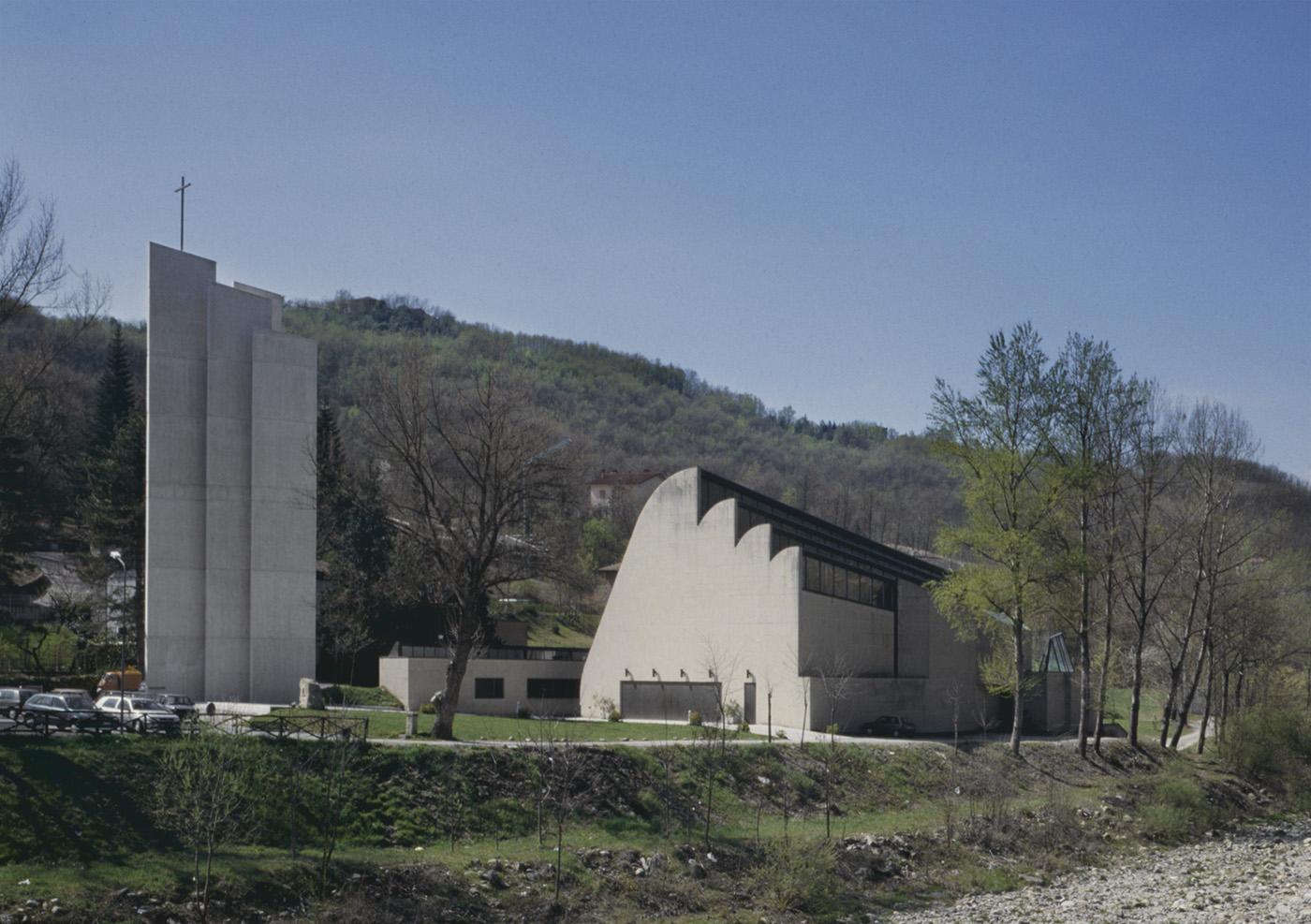 Riola church has a campanile on the far side of the forecourt consisting of five parallel vertical concrete planks. Photo: Maija Holma, Alvar Aalto Foundation

Aalto’s initial plan from 1966 already showed the church in its final form, but it was later supplemented by more comprehensive plans for old people’s home and a kindergarten. Planning resumed in 1969 and again in 1975, continuing until 1980. 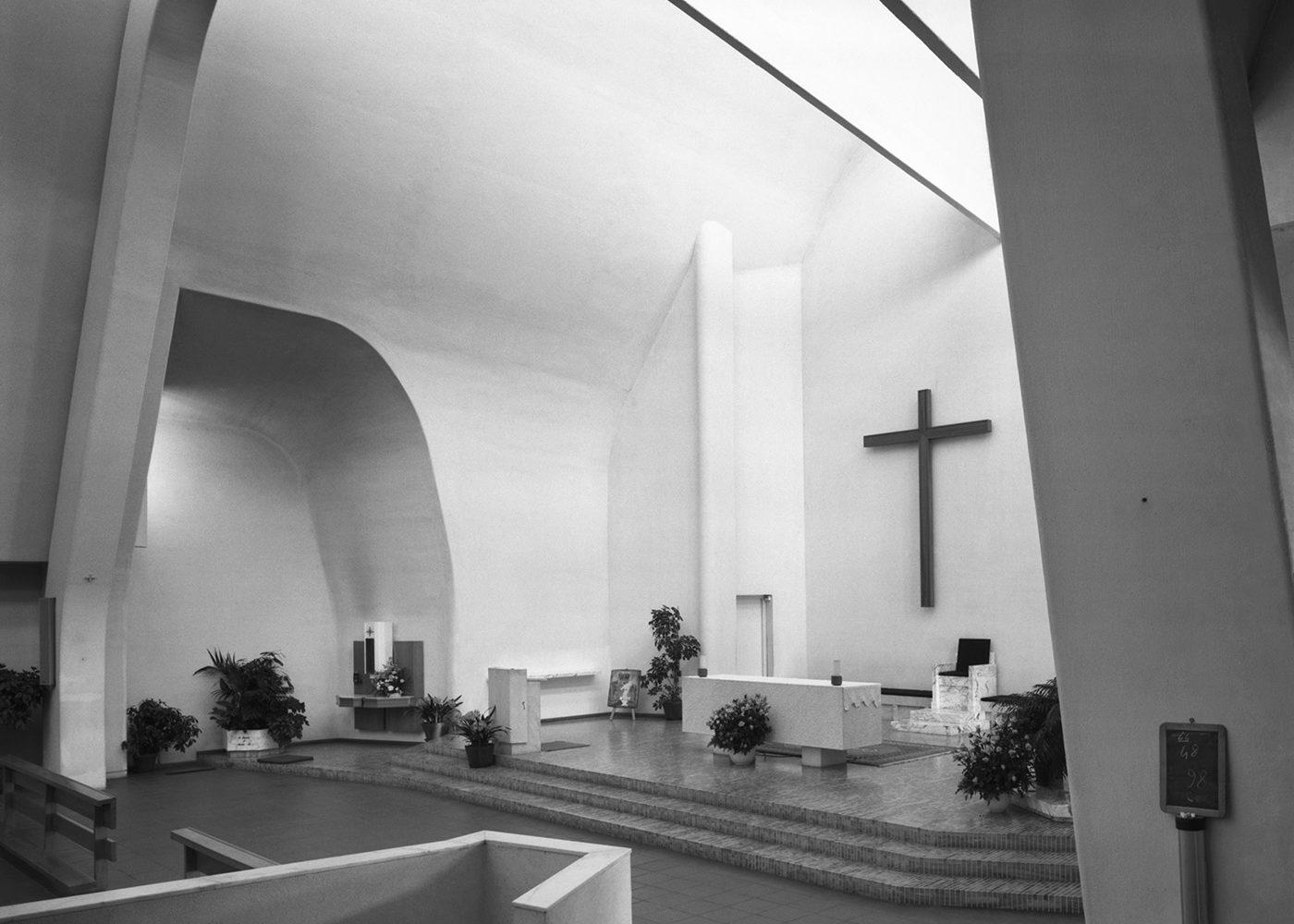 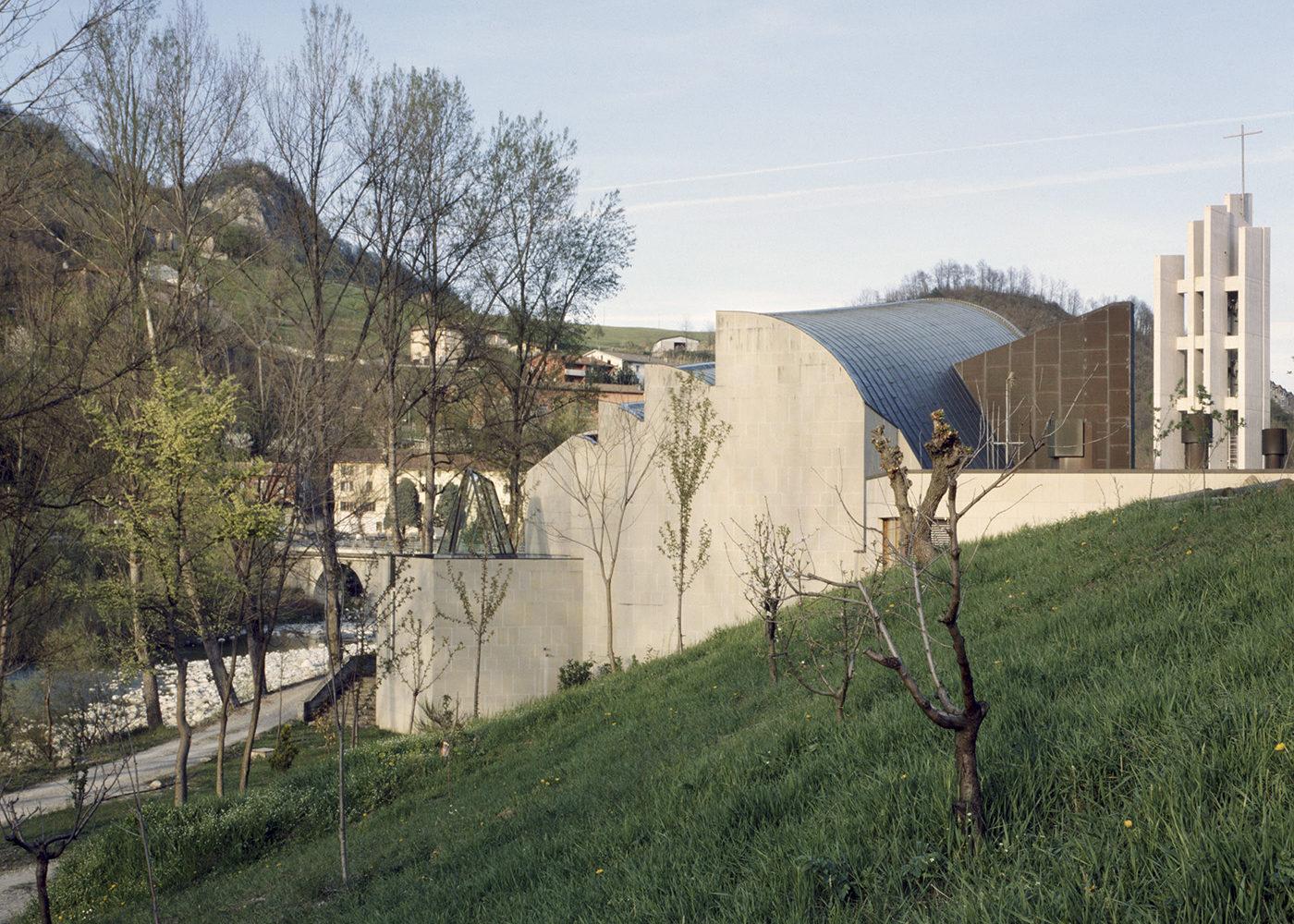 Riola Church is located next to an old highway bridge by the river Reno. Photo: Maija Holma, Alvar Aalto Foundation 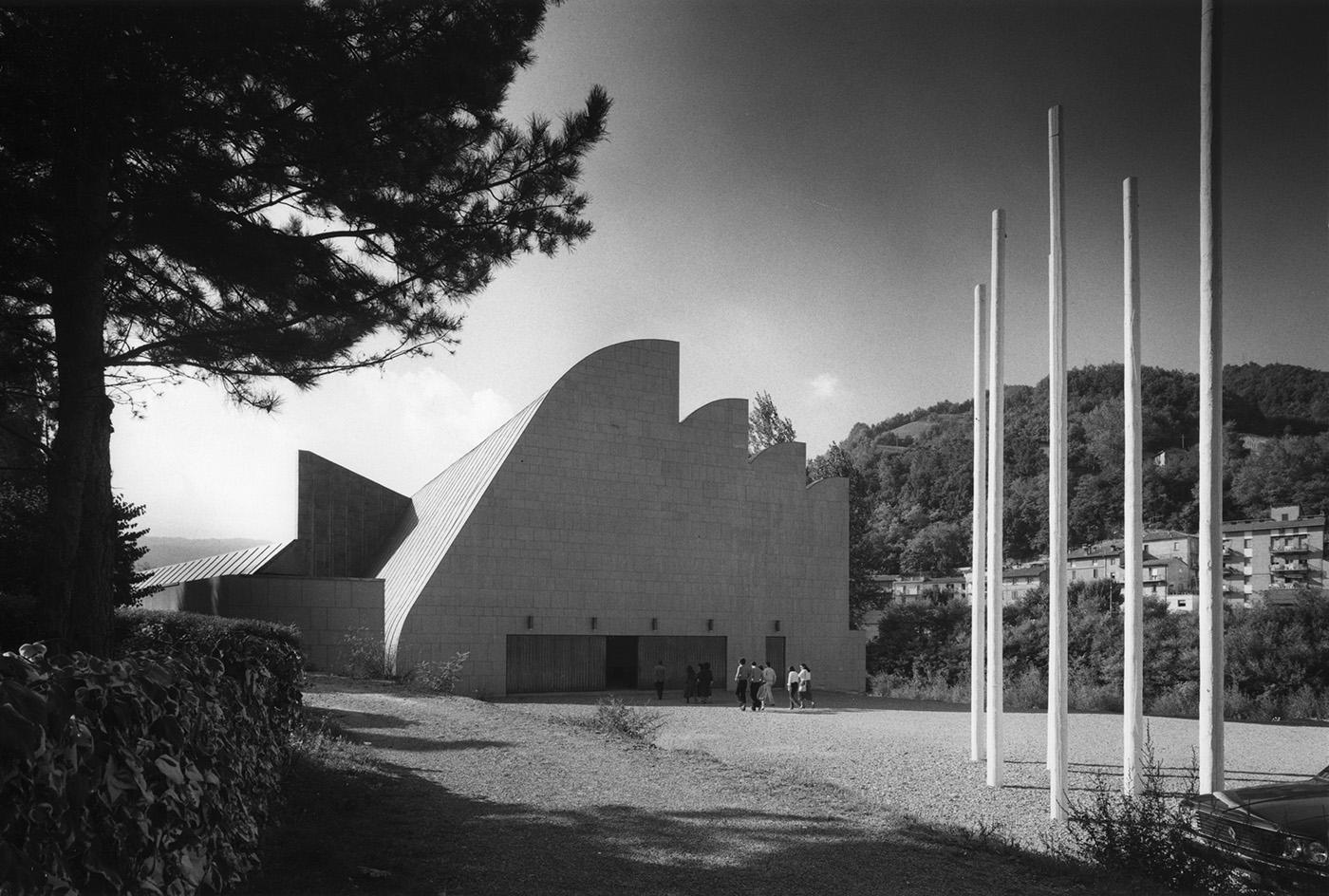 Riola Church is located within the province of Bologna in Italy, about 40 kilometers away from the regional capital Bologna. There are weekly flights from Finland to Italy. Direct flights from Helsinki to Bologna are available during summer and autumn. From the regional capital city of Bologna one can reach Riola by car or local train. Travel time by train to Riola is approximately one hour. Walking distance from the train station of Riola to the Riola church is approximately 5 minutes.

Read more about traveling within the Bologna region

Church is open for visitors daily during their opening hours

You can inquire about guided visits in Italian or English language by contacting the parish office either calling +39 339 153 0392 or emailing savverrio@gmail.com.